Last week started with fears of a default by Evergrande (OTC 🙂 (China’s leading real estate developer) fueling a technically damaging gap. Monday morning’s spread put the and well below their 50-day moving averages (DMA), the well below its 200-DMA and China’s large-cap ETF () to a new low 52 weeks. 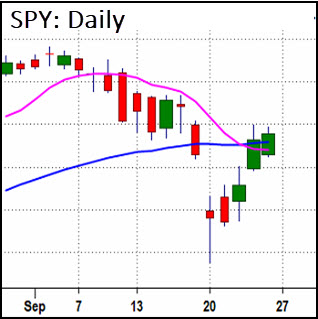 Global equity markets rebounded quickly with US stock indexes leading the way, most notably led by Grandpa Russel (IWM), which closed up + 2.79% for the week.

US stocks have also ignored the possibility of a US default.

The rebound was helped by additional fuel from oversold last week, and that currently means a rollback.

So the big question remains …

Is it mainly a technical rebound that will soon run out of steam or the start of a more substantial movement that will take to new heights?

Is the energy sector which led this week (+ 7.8%) indicating a robust economic recovery?

Disclaimer: Fusion media would like to remind you that the data contained in this site is not necessarily real time or accurate. All CFDs (stocks, indices, futures) and Forex prices are not provided by the exchanges but rather by market makers. Therefore, the prices may not be exact and differ from the actual market price, which means that the prices are indicative and not suitable for trading purposes. Therefore, Fusion Media assumes no responsibility for any business losses that you may incur as a result of the use of such data.

Fusion media or anyone involved with Fusion Media will accept no responsibility for any loss or damage resulting from reliance on any information, including data, quotes, graphics and buy / sell signals contained in this website. Please be fully informed about the risks and costs associated with trading in the financial markets, it is one of the riskiest forms of investing possible.