Dead cat bounce or bottom? What history tells us about the near future of the market

After 7 consecutive negative weeks for the (8 for the ), we saw a healthy reprieve last week.

The backdrop for last week’s rally was set by the previous week’s Black Friday (May 20), in which the S&P 500 fell more than 2% during the day and was a hair’s breadth away from reaching the designation. commonly accepted bear market pattern of a 20% correction to all-time highs. However, as the media highlighted the level of the bear market, the market reversed and rallied to end the day in the green.

Monday’s follow-up rally has created a 2-day pattern that market technicians (chart readers) might call a reversal. Tuesday’s negative price action tested that idea, and then the healthy rallies that followed on Wednesday, Thursday and Friday proved the trend correct. The S&P 500 ended the week up 6.5% and more than 9% above the previous week’s “bear market” low. This is the biggest weekly gain since November 6, 2020 (+7.3%) and two more weeks that market the pandemic low of 2020.

More importantly, we finally had a positive week and broke the longest losing streaks since 2001 and 1932 in the S&P 500 and Dow respectively.

While 7-week back-to-back losing streaks are rare in the S&P 500, they are not unprecedented. They are often a sign of weakening economic indicators. Often, they precede earnings downgrades. However, although rare, they are often followed by a future winning track record. See below:

Many talking heads believe last week’s positive rally was due to the release of slightly lower inflation data. April (personal consumption expenditure), a statistic favored by the Fed, came in at 0.2%, proving that inflation could be peaking. Inflation could slow directly as a result of overly high commodity prices, soaring mortgage rates and general demand destruction.

Also last week, the beaten sectors saw huge rebounds. Specifically, , , and were the leaders. As we noted in last week’s Market Outlook, this market is moving fast and furiously. More on that in the Big View section below.

Have we seen the bottom or is it just a rebound?

This will remain the big question. However, if you manage your investments tactically and actively rather than strictly buy and hold, there are opportunities for both.

From a technical perspective (more in Big View below), the S&P 500 (via ) is well below the critical 100-day (blue line) and 200-day (red line) moving averages. And these two averages remain on a descending line indicating that we are still in an intermediate negative market.

A fund? Not. Economic indicators remain negative and quite austere for the economy. Let’s go back a few weeks ago with a summarized version of our Macro View:

Stay negative. Still very high. prices have risen this week and gasoline at the pump has risen 50 cents per gallon over the past 30 days and has averaged $1.61 per gallon since Memorial Day 2021.

We take that from positive to neutral. Many companies are talking about freezing hiring, especially in the technology sector.

Stay negative. Russia is still attacking Ukraine, and there are problems in the Asian sector, including saber rattling from Taiwan and North Korea.

Stay very negative. The formula milk problem is just the tip of the iceberg.

Although the PCE fell slightly, which provided relief to credit markets, make no mistake. The Fed has a lot of hiking to do. Rates should go up.

Stay neutral. He has improved, but not yet enough to turn this negative.

Negative. Nothing has changed. Nourished.

Neutral. This could improve as the market recovers. However, past relief rallies have not attracted significant cash flows. People move slow once fear sets in

Neutral. This is an area that has improved. Watch high yield bonds ( or ) for any indication that this is turning negative again.

With 4 neutrals and 6 negatives, we remain cautious and negative on the economic context. We remain convinced that we are limited and that we are experiencing stagflation.

Rebound ? Absolutely. Buying into the market towards the end of a month, just before a holiday, tends to have an upward bias. However, right after these periods, the market also tends to settle down and does not fare as well. See below: 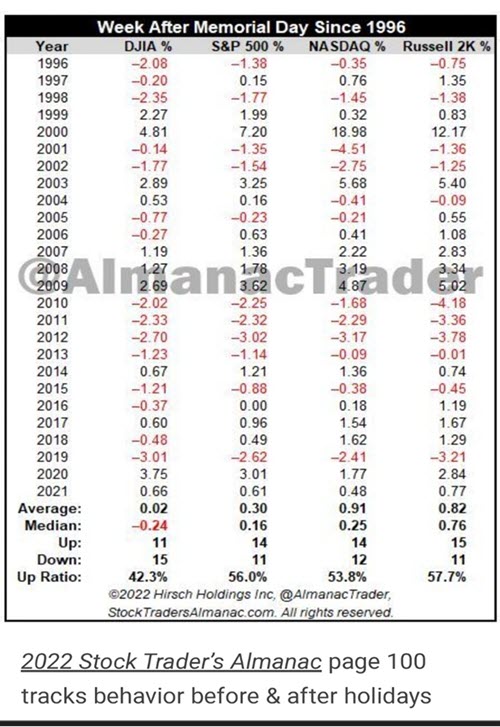 Week after Memorial Day since 1996

We remain steadfast in our vigilance to manage risk and continue to monitor our risk gauges for any signs that it is favorable for reinvestment. With market indices remaining in negative TSI territory, this also tells us that it would be premature to take a risk when approaching the markets.

The table below is a reminder of what we showed a few weeks ago. When the S&P is negative through April, it doesn’t bode well for the market’s annual performance. Add to that the challenging economic environment described above, plus a cycle of Fed tightening (and balance sheet shrinking), and you have an uncertain environment for risky assets. 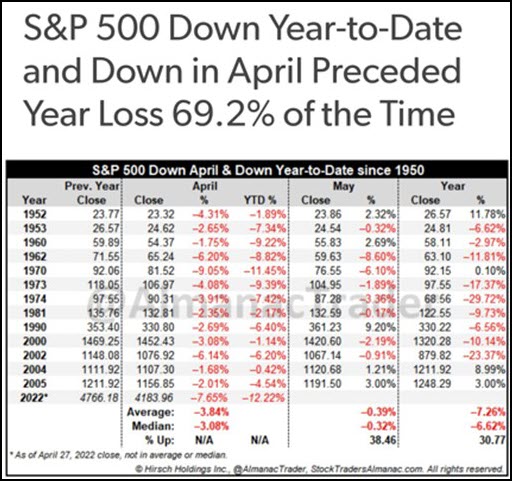